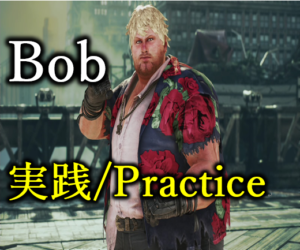 with you some of my tips.

1.Create the moment for Whiff Punishment

As already mentioned in “Theory” part,

Bob is good at Whiff Punishment.

If you haven’t read my Whiff Punishment tutorial,

I recommend you to read it first.

For Bob, in any patterns in the “Whiff Punishment tutorial”,

Anytime, back step and Cracker Jacker.

It is very easy.

but if you just want to be Vanquisher,

I think Cracker Jacker is enough.

The merit of Cracker Jacker

is that you can stop at the first hit,

By mixup these options,

the risk gets less.

What is important is that,

try to get ready for the Whiff Punishment.

And whenever you hit something,

step back a little,and wait for the timing.

2. Try to confuse them with Punch Strings

As I already mentioned in “Theory” part,

Some moves are solo,

See above. If you can mixup

these combinations, they will get busy.

you can tap 2 for the last.

High rank player will parry it,

but you can do it against players around 12 dan or so.

Main purpose of this not the damage itself.

“Try to draw their reaction.”

is the main purpose.

See above. This is the main purpose.

For those who try to move

before second and third attack,

the last kick will hit.

And you can get additional damage

Bob’s right upper cut can be a combo launcher

I use it when I expect their moves

And even the Upper Cut is blocked,

it has no punish.

See above. You can crouch their 1,2 punches.

Usually, don’t do the second punch.

The second one has Block Punishment.

Let them wait for the second one,

The second one is high,

so if you keep stopping at the first one,

they will wait or move.

If they try to move,

the second one becomes counter hit,

then the third and fourth will hit accordingly.

Personally, I stop at the first and the third,

because the last one is high.

this combination is very useful.

and no Block Punish.

I sometimes do this move

For other punch moves,I would say,

f+2 and 2 during rising are also handy.

The opponents will stop and

be careful for the second shot.

Bob’s Panic Moves are not that bad.

High kick(4) is a combo launcher when countered.

See above. The combo is easy.

And Bynhme Strike(1+2 while sidestep)

but some players can’t react with it.

which keep them waited for my Panic Moves.

Bob is a good character to practice Whiff Punishment.

So if you have never chosen him,it is a good opportunity.

Please read my article on Kazuya, how to win in Online match. My best rank is 22dan(Seiryu) in online matches in Japan. Let me share my theory on Kazuya strategy!

If you want to be Vanquisher, you need to be careful for "Hit Confirmation". I will tell you how to do it in matches.

How do you get damage with Asuka in online matches? I will tell you Asuka's strategy how to use him. I have promoted in Savior(19dan) in TEKKEN7 online, so I would like to share the ideas of Asuka. In this page, I focus on "Panic moves".

One of good points in Hei is that he has many good Middle moves. I will tell you good and bad points of each middle move. Please make the most of Hei's middle moves.

It is very important to do Whiff Punishment to win in TEKKEN7 online. But first of all, you need to understand the concept of it. I will show you how to do it using Gif animations.

In this article, I will talk about Gigas good Pokes(small moves). They are very useful, so I will show you when and how to use them in matches.

How do you get damage with Asuka in online matches? I will tell you Asuka's strategy how to use him. I have promoted in Savior in TEKKEN7 online, so I would like to share the ideas of Asuka.

Let me share with you how to use Bob in online matches TEKKEN7. My best rank is Overload(19dan) in Japan Arcade. I will show you basic combo for battles.

Please read my article on Josie, how to win in Online match. My best rank is 17dan(Destroyer) in online matches in Japan. Let me share my theory on Josie strategy!

Please check my online videos. My best Feng's rank in Japan, is Suzaku(23dan). You can copy how I fight, and try them when you use this character. 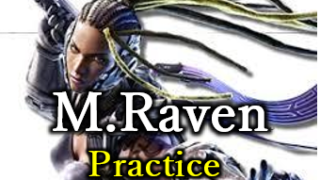 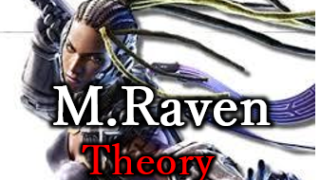 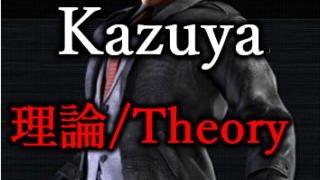